In 2013 I wrote an article about the “Thigh Gap” craze. I was pretty shocked that young ladies were concerned with and strived to attain this. Obviously, I am not saying that ladies that are naturally slim or hard gainers are unhealthy or look bad in any way shape or form. I am speaking of the ladies who starve themselves to the point of being sick to attain unrealistic goals.

2014 I saw less of ladies wanting the slimmer look and leaning more towards curves. I saw more strong is sexy and women really working hard for a more healthy lifestyle rather than starving. Last year seemed to be the year of good health and realistic goals. Well almost. Towards the end of the year I started seeing more about squeems. If you are unfamiliar, a squeem is a lot like a corset. Womene are wearing them to attain that tiny waist. This was actually a very popular practice in the 16th and 17th centuries. Women desired the elongated bodice with the extreme tiny waist. Women actually started training their waists around the age of 10 or 11. They strived for what is now called the Victorian wasp waist. The practice stopped being so extreme because it was obviously dangerous. These women had very small appetites, so they could stay restricted throughout the day. Some had issues walking and stayed short of breath, fainting was common place among women. Ribs were broken and organs were displaced.

‘On Saturday afternoon Dr. Lankester held an inquest at the Cherry tree, Bowling Green, Clerkenwell, touching the death of Jemima Hall, aged 21.  The deceased was in service at 71 Myddleton Square, and was taken ill on the Wednesday, and put to bed complaining of pains in her inside: a doctor was called, saw her that day and the next, but was wholly unable to discover the nature of her malady, and on calling the third time she was dead.  A post mortem examination was then made by the Coroner’s order, when it was found that the whole of the organs in the body were contracted and out of their place, and her stomach was smaller than that of an ordinary infant. Death arose from congestion of the lungs and brain, the result of tight-lacing, which the young woman, who was of prepossessing appearance, had long persevered in. The jury returned a verdict of Death from the congestion of the lungs and brain, produced by tight-lacing.  The body was fearfully emaciated, and the medical gentlemen stated it was the most remarkable case of the kind that had ever come under his notice.  The Coroner said that he never remembered in his experience a case in which lacing had been carried on to such an extent.’ ~ Staylace.com

For years I have only seen corsets used as sexy lingerie for the bedroom 😉 but over the past 6 months, have seen many women turn to squeems, which is now common practice to see. Women “training” their waist all day and night for that same Victorian look. I think I see more competitors wearing them than anything, but they post themselves wearing them on their social media accounts, which in turn has women from every walk of life thinking it is a short cut to their dream body. Even men have jumped on the bandwagon.

So there’s that. Then yesterday I saw this….

Soooooo…. the big thing for 2015 is a Bikini Bridge??? I seriously have no clue why this is considered attractive or why this is desired??? To be so skinny that your hip bones protrude from your body and people can see down your bikini when you lay flat. This is mind boggling to me. We have enough body image issues, but seem to start creating more and more. I honestly want Zoe to stay small forever, so I don’t have to have discussions with her about such nonsense. It is in no way healthy to try to lose so much weight that your hip bones are protruding. Let’s stop the madness with all of these unrealistic body fad and just strive to love the body we are in. 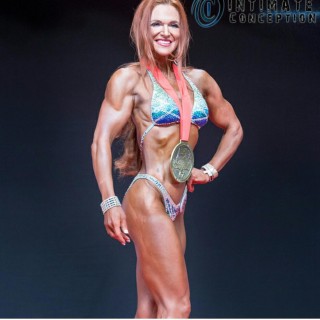 Powered by Saturn Supplements Checkout all their phenomenal products! $6.95 Flat shipping anywhere continental U.S.—so load up! Free product gift for orders above $75. Bonus.....enter the code SBSC and get 10% off your whole order!!!! Perfect gift for the athlete in your life ;-)

DISCLAIMERS I am not a registered Doctor, Nurse, or Dietitian, I do not have any official Degrees, training, or certifications (as of yet) in fitness or nutrition. My blog is simply a documentation of my life and my opinions. The views I express are mine alone, based on my own experiences, knowledge, and research. They should not be taken as medical advice. Always talk to your doctor or a trained professional before starting a new diet and/or fitness plan. FOR PRODUCT REVIEWS, I have been provided with a free samples/products to review. I am under no obligation to review them if I so chose. Nor am I under any obligation to write a positive review or sponsor a product giveaway in return for the free product. All statements are my own truthful opinions.